The store at 3220 Sheridan Drive is owned by Joseph Fiorentino of Batavia. The Canandaigua native spent 25 years in sales at Ryder before deciding he had enough of corporate America and wanted to do something on his own.

“This is good news for anyone who uses Apple products,” says Baynes. “Whether you want to extend the life of your devices or buy refurbished models at reduced prices, Experimac is your one-stop shop.”

“The Walden Galleria Apple store is great for new Apple products,” says Fiorentino. “But there is a whole segment of people who want pre-owned Apple products at reduced prices.”

Fiorentino says Experimac is the perfect solution for Apple products that are no longer covered by warranty.

Experimac was started in a garage by founder Jim Muir, who eventually opened his first store in West Palm Beach, Florida in 2009. After enjoying several years of success in Florida, Muir decided to expand and began offering others the opportunity to own Experimac locations through franchising.

There are 150 locations across the country and a handful of stores around the globe. 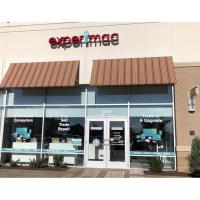