The 10,000 square foot free-use facility at the Northtown Recreation Center in Amherst has been built in memory of Alix Rice to provide a safe and fun outlet for skateboarding, BMX and inline skating.

The California-style project that includes bowls, ramps, rails and benches has been in the works since August of 2011, a month after 18-year-old Rice was fatally struck by a drunk driver in Amherst while riding her longboard home from work.

“It’s been a seven-year labor of love,” says Tammy Schueler, the mother of Alix Rice. “This day would never have come without the hard work and perseverance of so many in the community.”

The Alix Rice Peace Park Foundation was formed in 2012 to oversee the construction and fundraising for the skatepark designed by Grindline Skateparks of Seattle, Washington. Groundbreaking on the facility took place in July of last year, and Independent Shotcrete of Brooklyn started forming and fine grading the park in April.

“Thanks to donations from far and wide, we were able to turn this idea into a reality and a lasting tribute to a beautiful girl lost too soon.” says Jon Fulcher, President of the Alix Rice Peace Park Foundation.

“We are proud to have this top-notch facility for skateboarders here in Amherst,” says A.J. Baynes, President/CEO of the Amherst Chamber of Commerce. “Up until now, there wasn’t a safe place in our community for skateboarding enthusiasts to gather and enjoy this sport.”

Baynes, the former Chief of Staff for Senator Patrick Gallivan, was instrumental in helping to bring Alix’s Law to the Senate floor. The bill requires drivers to stop and investigate when they know or have reason to know they have caused injury or damage. It closes a loophole in the current law that allowed the driver who struck Alix to be acquitted of the most serious charge. The Senate passed the bill unanimously, but it remains stalled in the Assembly.

The Grand Opening celebration is free to attend and features food trucks, prizes, a raffle for a Super Chexx Bubble Hockey game, and if you buy a Family Brick for the Alix Rice Peace Park, you will receive four tickets to a Buffalo Sabres preseason game this fall.

More information can be found at AlixRice.com. 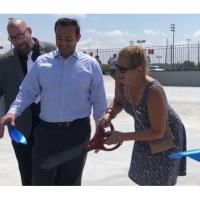