“Meet Our Past” - A Walk Through History on June 6th

Lancaster, NY – On Sunday, June 6, the public will have the opportunity to meet and hear the compelling stories of people who had an impact on the development of Western New York and helped shape its history, as they are led through a series of informative, fact-based indoor and outdoor scenes during the Hull Family Home & Farmstead’s “Meet Our Past” tour.  These 90 minute docent-led walking tours will step off every 30 minutes beginning at 2:00 p.m. at the Hull Family Home & Farmstead, located at 5976 Genesee Street in Lancaster.

Meet characters from the past – Some you know, while others are little known, but all had a story – hear compelling tales – Stories of people who had an impact on the development of Western New York and who shaped our history.

“Meet Our Past”
Warren Hull – Revolutionary War Veteran, among the first settlers of Western New York; Erastus Granger - appointed by President Jefferson as Indian Agent, he defended Black Rock along with Red Jacket and the Seneca's in the War of 1812;  Joseph Ellicott - agent for Holland Land Investors;  Cyrenius Chapin - defender of Buffalo that fateful day in December 1813;  Joe Hodge – escaped slave;  Sophia Hull -  Daughter of Warren & Polly, who became an activist.

About The Hull Family Home & Farmstead
Originally built circa 1810 by Warren Hull, a Revolutionary War veteran who traveled west from New England with his wife Polly and their children, the Hull Family Home and Farmstead is the only fully restored stone dwelling of the early 1800s in Erie County. Here, 200 years of history can be told: the Revolutionary War, the War of 1812 and the burning of Buffalo, the opening and impact of the Erie Canal, early pioneer life, the Abolitionist movement, and much more on into the 20th century. Archaeological digs have revealed clues as to how the family lived, worked and played, and have led to plans to reconstruct or restore outbuildings and the farmstead.

Open for scheduled events and by appointment, the Hull Family Home and Farmstead is listed on the National Register of Historic Places and the New York State Register of Historic Sites. Designated as a tax-exempt 501(c)3 organization with an Absolute Charter from the NYS Board of Regents, Hull House Foundation had its origins in the former Landmark Society of the Niagara Frontier, when the Hull House was purchased in 1992 for protection and preservation. For more information, visit www.hullfamilyhome.com 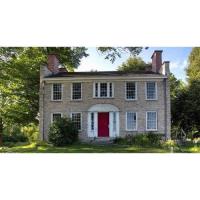