The New England inspired seafood trailer will officially open to the public at 3 p.m., featuring “ocean to table” oysters that come directly from an oyster bay farm in Massachusetts that feeds directly into the Atlantic.

“It is exciting to see a restaurant flourish during this challenging time for businesses,” says Baynes. “We are proud that even during a crippling pandemic, Mike Tobin is committed to once again bringing a guaranteed fresh seafood product exclusively to our area.”

"Bringing fresh and affordable seafood to Buffalo was a mission I set out on over 3 years ago starting with the opening of Fresh Catch. One missing piece was a seasonal waterfront seafood trailer, reminiscent of what you'll find in the areas where our seafood comes from,” says Tobin. “Shuck Shack features oysters that are raised by some of the top boutique farmers on the East Coast, hand dug clams from Cape Cod, chilled lobster claws from our lobster fishermen right off the coast of Massachusetts, all at an affordable price.”

You can find Shuck Shack along the shore of the Buffalo River with socially distanced seating, a fire pit and lawn games. Kayakers can also access the docks to patronize the restaurant. Saturday hours are until 9 p.m. and 12-8 p.m. on Sunday. More information here. 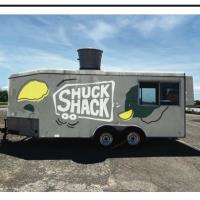