WHAT: Hover Networks employees, CEO, Darren Ascone and COO, Sara Quinlan, will be joined by Amherst Supervisor, Brian Kulpa, and Amherst Chamber of Commerce President/CEO, A.J. Baynes, for the groundbreaking of its new headquarters at 475 Lawrence Bell Drive in Amherst. The 12,000 square foot, single story building will include office space and a  warehouse for Hover Networks and its 22 employees. They are expected to move in April 2020. The company plans to add more jobs in the coming years.

“We are proud Hover Networks chose Amherst for its new headquarters,” says Baynes. “We welcome this growing company and the jobs they are bringing to our community.”

“The new building ushers in a new era for Hover Networks as we enter our second decade providing unapparelled service and support to businesses in WNY and across the country.” says Quinlan.  Ascone added, “We are very excited to be moving to Amherst and to have custom built space to accommodate our needs. It will provide new efficiencies for both our employees and our customers.” 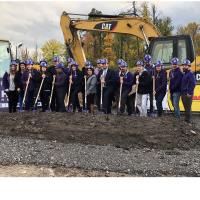