My Dad’s is a unique dining experience, offering patrons grab-and-go food, fresh and packaged market items and a full-service restaurant and bar. It is located in the former TGI Fridays at Main and Transit in Williamsville.

The owners are two Southern Tier men who have a long history together working for Mc Donald’s.

“This new endeavor by these Western New York natives adds to the economic strength of our small business community,” says Baynes. “We welcome My Dad’s and thank the owners for choosing to invest in the region where they grew up.”

Owner Bill Lewis was 16 years old when he got his first job as a crew person behind the counter at the McDonald’s in Olean. He spent the next 30 years with the company, moving up as Manager, then General Manager and then as Area Supervisor, overseeing five McDonald’s in the Southern Tier and Northern Pennsylvania.

He left it all behind about a year and a half ago to join his partner who sold his interest in several McDonald’s franchises to start My Dad’s, the latest trend in dining.

“We wanted a farm to table concept, allowing people to buy what we are cooking in the restaurant,” says Lewis, who picked up most of his ideas from big city restaurants. The restaurant also boasts offering something for everyone, from casual dining, like burgers and wings, as well as finer options, including fresh seafood and grass-fed meats.  It also has wine and beer on tap.

And what about the name?

“If Dad likes it then everybody likes it,” quipped Lewis.  Both he and his partner are also dads.

The Grand Opening will feature a “steamship round of beef” for carving. For those who don’t know, it’s the thigh of the cow.

Lewis and his partner also bought the former Italian Fisherman in Bemus Point, renamed “The Fish.” 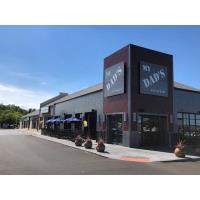